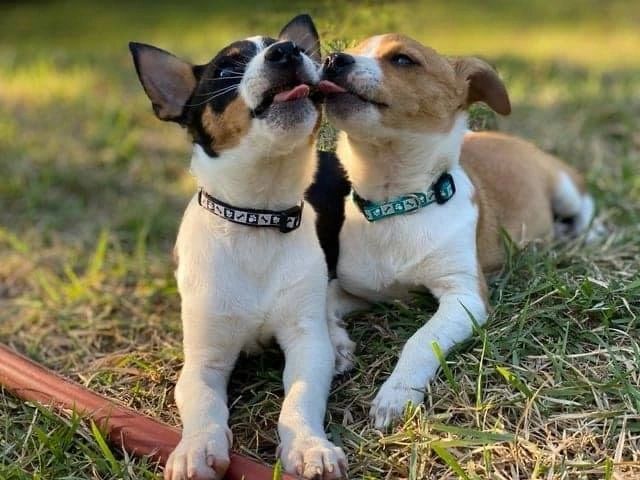 Due to Covid-19, we are not doing in home meet and greets or visits.

Because of added sanitation efforts  (as mandated by the state) , we are increasing our adoption prices temporarily.

Rescues are financially impacted by Covid

Your support enables us to save and love on more dogs. Thank you.

Dogs not marked pending may have applications in progress

During the pandemic we are open, but experiencing a higher volume of applications. Thank you in advance for your patience.

Bandita is a 1 year old pit mix that is looking for a forever home. Bandita loves her humans attention so much that she can get jealous with other dog siblings. We are suggesting Bandita be the only dog in the home.

Nipsy is a sweet mutt from Texas. He loves dogs and is also ok with kids! Nipsy can be fearful of men, so  patience is key when working with him.

Anima was found abandoned in a yard in Texas. She was in rough shape and you can see her bones as she went for many days without food. Anima Is a lab mix and around 4 months of age.

Frankie is in rough shape and after we get him a little TLC he will transport to Massachusetts!

He would do best in a home with another dog to help build his confidence.

Duck is 2 years old and looking for his forever home. He is easy going and gets along with dogs of all sizes. He can be shy at first but does warm up quickly.

Clover is a 4 month old, pointer mix puppy who loves life! Clover had a severe injury to her leg after getting hit by a car where it needed to be amputated. Being a tripod does not stop Clover from running around with her brothers and sisters!

Willow is a 4 month old, pointer mix puppy that is looking for a family of her own! She gets along with dogs and cats! She enjoys running around, being your typical puppy!

Fern is a 4 month old, pointer mix puppy that is looking for a family of her own! she gets along with dogs and cats! She enjoys running around, being your typical puppy!

Cypress is a 4 month old, pointer mix puppy who loves running around with his brother and sisters! He is dog and cat friendly and your typical playful puppy!

River is a 4 month old, pointer mix puppy who loves running around with his brother and sisters! He is dog and cat friendly and your typical playful puppy!

Lulu is a 5 month old, terrier/lab mix puppy who loves running around with her sister Moo! She gets along great with all dogs and is your typical playful puppy!

Moo is a 5 month old, terrier/lab mix puppy who loves running around with her sister Lulu! She gets along great with all dogs and is your typical playful puppy! Proper training will be needed. *New Picture coming soon!*

Dixie is a 1 year old Jack Russell mix that will be looking for her forever home. She came from a situation were training was minimal so she will need some help with understanding the do's and dont's! Dixie is shy at first but does warm up!

Viejo is a senior Chihuahua mix  that will be coming soon! He has had a rough start in life and will need some major TLC before traveling north. More info to come!

Dogs listed below have a current adoption hold

good with other dogs , not cat tested.

Zion is a female Border Collie who is 6 years old. More info soon!

Harmony was found tied to a tree in chains with her eye missing. In her past life she suffered a trauma to her skull. She recently got her eye stitched and accessed by a vet, and thankfully doesn’t need surgery. Despite her rough start to life this girl is always smiling! She is great with dogs and really sweet! Not cat tested.

Sarah is a 1 year old Jack Russell mix that will be looking for her forever home. She came from a situation were training was minimal so she will need some help with understanding the do's and dont's! Sarah is playful and very curious and quick to explore.

Hailey was rescued from a kill shelter in TX. She lost her babies when the shelter spayed her. Hailey is a sweet girl dying to be someone’s shadow. She is affectionate and good with dogs.

we do not approve the use of electronic fences

Sign up to learn from us about available pups, news and events.

When I walk down the street with, or bring my dog essentially anywhere, people pay attention. It’s not often that you see a happy-go-lucky pouncing 50-pound lab…at least not one who only has three legs.

Gunner came into our lives through happenstance. We were not looking for another dog; we had adopted our little Kensington about a year prior and were so happy to have “lucked out” with finding a great rescue dog. No way was I messing with that dynamic. I believed the odds of finding another well-adjusted, happy pet from a rescue would be astronomical. We all hear how rescue dogs were abused, malnourished, unloved…that’s how they got to the rescue, right?

When thinking about adopting a pet, people assume that they are inheriting an animal who wears the abuse he’s experienced. No one knows if the dog will be aggressive, or timid, or have some sort of unknown trigger and lash out. That’s scary for anyone – of course it is. But we tend to forget there is an intermediary place for them. We forget about people like Ruby, who purposely looks for those dogs—the hurt, scared, sick, or left behind. Ruby, the woman who has saved literally HUNDREDS of lives, and absolutely saved my sweet Gunner’s life... We forget about the foster families.

Ruby began fostering dogs about 3 years ago. Her journey also began through a bit of happenstance; an act of kindness at a drive-through that changed her life and the lives of hundreds of dogs. Waiting in line, she noticed the car in front of her feeding a stray dog. After getting her order, she opened her car door to share some of her own food. The pup, having other ideas, jumped into the car, and that was that. Ruby had her first foster dog, and Junie had a new chance at life.

Opening your home to these dogs isn’t easy. Many are timid, uncertain of how they will be treated. The personalities Ruby welcomes are the very ones of which adopters are wary. She knows to study their body language, to give them space, time, positive energy and praise, and most importantly love. Ruby is the person who teaches them how to trust, maybe for the first time in their lives. She gives them structure and routines to provide boundaries and to prepare them to successfully transition to an adoptive home.

Through her patience, Ruby sees pups flourish. Even a simple tail wag can be an exciting sign of a dog who is starting to trust. Ruby spends her time teaching these dogs things that we as adopters need to see to feel confident bringing a dog into our home. She trains them to like their crates – showing these dogs that there is a safe place to rest. She walks them – sometimes it’s the first time they’ve even worn a collar. She socializes them – exposing them to situations they very likely have never experienced, but that we may want to share with them in our homes. She loves them at their worst and nurtures them back to their true best selves. Then, she lets them go – to us, to our homes.

It’s very likely that everything you have read thus far is information you logically know on some level. I think one thing that many of us, especially here in New England, tend to forget is that shelters everywhere are full, and we are lucky to live in an area where shelters are standardly no-kill. But it isn’t like that everywhere, and dogs are euthanized every single day due to overcrowding. Gunner was one of these dogs. When Ruby found Gunner, he was next on the list to be euthanized. He was in the shelter in pain with a shattered leg, because someone had shot him. He still has the bullet fragments in his shoulder now, though you would never think it. Ruby found this sad guy, and decided she needed to save him. After reaching out to as many connections as she could, A Place for Ace stepped up. Together, Meagan and Ruby got Gunner out at literally the last minute.

Gunner is about 2 years old. No one really knows what his life was like before he met Ruby. We know he wasn’t the friendliest of dogs when she first met him, and perhaps that is because he was in so much pain, but we will never know his whole story.

What I do know is that since March, he’s been loved like nobody’s business. He had his leg amputated and was nursed back to health by Ruby before we adopted him. He THRIVES in a house with three crazy active boys, a feisty terrier who will not leave his side, and two adults whose hearts he owns. I often wonder what the life he had was like, and honestly, it infuriates me to know someone hurt this sweet, gentle pup. I try not to think about part of his life too much. Instead, I think about his life with Ruby, his angel.

I’ve come to know Ruby a bit – we keep in touch because of how much she loves Gunner. She inspires me. She saw Gunner--a sad, injured, scared body of a dog. But she saw Gunner, the sweetest, most loving soul of a dog, and brought him back to life.

Ruby didn’t just save him physically. She gave Gunner the love and space to be himself. He didn’t have to live in fear; he could run and play; he could jump up to the heavens; he could give hugs to strangers; he could demand more pats when she stopped; he could love and trust.

That’s the thing about fostering—it isn’t about just preventing dogs from being euthanized. It’s about restoring a dog’s trust, and giving him the confidence to be man’s best friend. It’s about showing a dog that someone can love him just as much as he loves a person. Ruby does that, really really well. Thank you, Ruby. From my family and the hundreds of others your beautiful heart has brought together. Our gratitude to you is endless.